initiator and director of SIMM, and doctor of political and social sciences from University of Ghent, lukas.pairon@simm-platform.eu 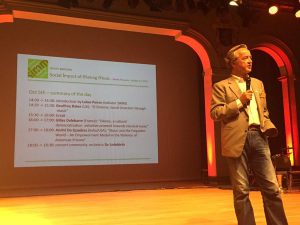 After initial studies in human sciences at a private university in Lugano, Switserland, and his master in politics of education (Université Paris VIII), Lukas worked several years as a young researcher in the field of adult education at Unesco (Paris) and later at the Ministry of Culture of the French-speaking Community of Belgium (Brussels). At the age of 27, he changed his professional occupation and became the artistic director of the contemporary music and dance programs of the Flanders Festival. Later on, he created together with Judith Vindevogel the production house for contemporary music theatre Walpurgis, which he directed during about 10 years. In 1994 he co-founded together with its musicians the now famous contemporary music ensemble Ictus and was their general director until the end of 2012. In 2005 he founded the philantropical organization Music Fund, which works with music schools in the Middle East, Africa and Caribbean, through donations of music instruments and through training programs for technicians able to repair such instruments. Since 2013, he took a career break and started a PhD study in Kinshasa (DRCongo) for the University of Ghent (UGent, Faculty Political and Social Sciences) on the possible significance of certain musical practices for young people living in violent surroundings. Discovering that little research was being developed in this field, Lukas decided to create the international research platform on the Social Impact of Making Music (SIMM).