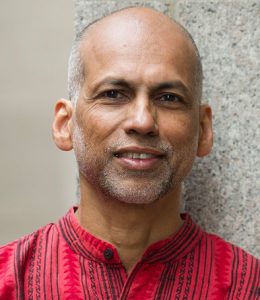 Professor Dr André de Quadros, conductor, ethnomusicologist, human rights activist, and music educator has conducted and undertaken research in over forty countries and is a professor of music at Boston University where he also holds affiliated faculty appointments in the African Studies Center, the Center for the Study of Asia, the Institute for the Study of Muslim Societies and Civilizations, and the Prison Education Program. He is the music director and conductor of the Manado State University Choir, artistic director of a conducting institute at the Eric Ericson International Choral Centre: CONDUCTING 21C: Musical Leadership for a New Century, artistic director of the London International Music Festival, artistic director of Aswatuna – Arab Choral Festival, and artistic director of the Bali International Choir Festival. Apart from his work in two Boston prisons, he is involved in several community arts projects aimed at social change. He is the editor of The Cambridge Companion to Choral Music published by Cambridge University Press together with numerous articles and chapters. Since 2008, he has partnered in projects with Palestinian and Israeli choral musicians in Jerusalem, Galilee, the West Bank, and in the Arab world. He is a key partner in a national project to design and develop children’s community choirs in numerous cities in Mexico. Dr de Quadros’s studies have been at the Bombay School of Music, the University of Bombay, La Trobe University (Australia) – the University of Melbourne, Monash University (Australia), the Universität Mozarteum in Salzburg with a DAAD (German Academic Exchange Service) scholarship, and at the Victorian College of the Arts (Australia).

Presentation: Music and the Forgotten World – An Empowerment Model in the Violence of American Prisons

The suffering of those in prison is not sufficiently known or recognized. With the large number of incarcerated men, women, and youth, America ranks at the top of countries with its per capita population of those under some kind of supervision in the criminal justice system. Every week for the last three years, around twenty men from a Boston prison come together for music sessions, and a slightly smaller group of women gather in a Boston women’s prison for such an activity. My colleagues and I have developed EMPOWERING SONG, an approach rooted in improvised song, poetry, bodywork, movement, and imagery for personal and communal transformation. Our model of music making seeks to displace existing authoritarian modes of pedagogy and practice. This presentation will describe the approach, with both the philosophical underpinnings and the process. I will provide numerous examples of artistic work arising from the prison. These examples will serve as impulses for discussion and enquiry into impact and empowerment.